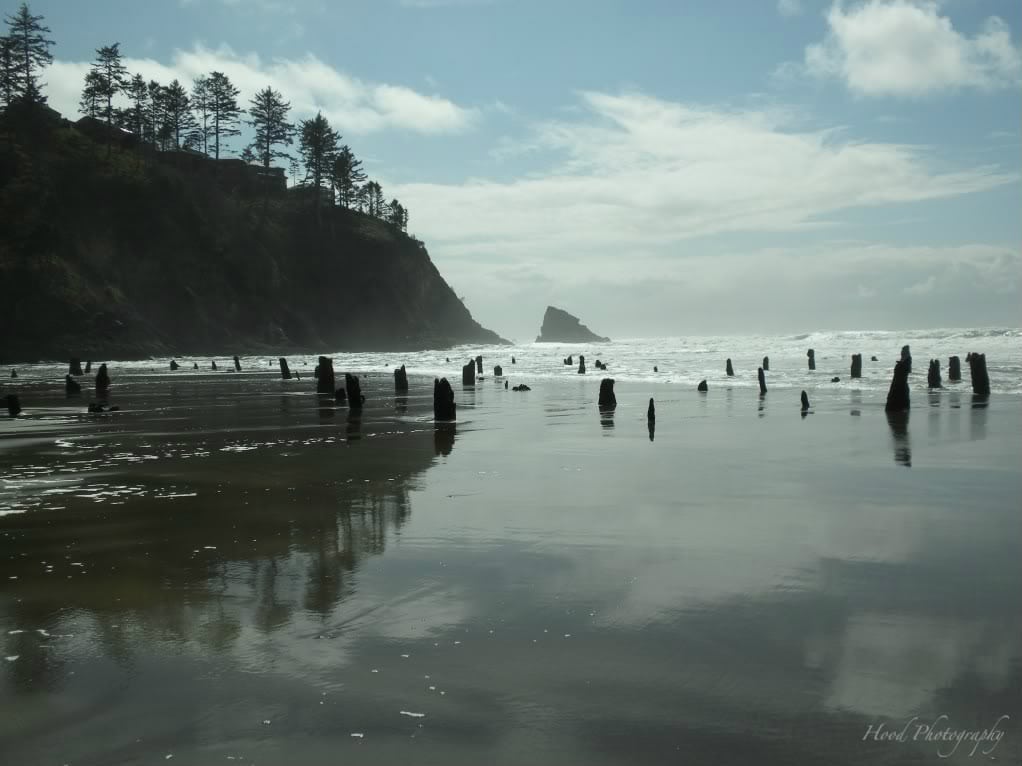 The winds cut deeper and make progressively louder noises as the days shorten. Fog creeps in from the sea more often. And then Halloween shows up, as if to really remind us about things otherworldly. It’s no wonder Oregon’s northern coast has a load of ghostly tales swirling about. It’s no wonder the remake of “The Fog” currently in release is set in a fictional North Oregon Coast town. From flying pots and specters who’ve moved from one building to another in Seaside, the ghostly legends of a hotel in the Nehalem Bay, to the myriad of hauntings in ancient Astoria – there’s plenty for the ghost-hunting tourist in this pristine and stunning area.

Tales of things creepy abound in Seaside – but they’re hard to find. It’s almost as if they’ve been swept under the carpet.

For almost 100 years, the old Hotel Seaside (later named The Seasider) was a grandiose, beautiful building that was a sort of centerpiece to Seaside, at the Turnaround. So it’s no surprise that place acquired tales of apparitions and otherworldly guests over the years. There were numerous spirits that purportedly haunted it.

These days, the Shilo Inn sits in that spot. But when the old hotel was torn down, the spooks moved to Girtle’s Restaurant, just down the street on Broadway, according to owner Bob Girtle. He recounted numerous stories of otherworldly happenings in the restaurant, having seen them himself or coming from various employees who tell their own tales. They talk of seeing the mysterious shadows of feet walking behind the door of a closed-off area of the kitchen, visible from the small space between the floor and the door. This happens when it’s not possible anyone else is in there, say Bob and his crew. They don’t even check that room anymore when they see the shadows.

Then there is the notorious flying coffee pot in the galley area between the kitchen and the main dining room. Bob and others on his staff have experienced this more than once. Sometimes it moves a bit, others it literally flies across the hallway.

Bob said he inherited some employees of the old Seasider back in the 80’s, and at least one said they saw some of the same ghosts.

John Sowa, owner of the New Orleans-style eatery Lil’ Bayou, also related tales of moving objects in the kitchen and a strange sense of someone being near him while alone in his office. Kitchen utensils are found in different places than employees have left them, or an object suddenly falls off a hook or a shelf.

Lil’ Bayou lies in the historic Gilbert District of Seaside, which is filled with old buildings, almost all with upstairs areas that are often unused. The charming, atmospheric area has gone through a rebirth in recent years, and often there are whispers of ghosts coinciding with many of the renewed buildings.

The Seaside Aquarium may have a closet containing something – or rather, an upstairs that could be haunted. When the building was a natatorium back about 80 years ago, there were apartments at the top floor. That area isn’t used much at all now, but manager Keith Chandler says he’s heard whispers over the years the top floor is haunted. Various stories have been handed down through the generations about noises coming from there.

Manzanita, which caps the north end of the Nehalem Bay, is shrouded in mists and mystery, with Neahkahnie Mountain looming overhead and legends of a galleon and its buried treasures. Some versions of that tale contain atrocities, like purportedly burying their African slaves alive with the treasure to keep the natives away.

On its beaches, there are mysterious piles of rocks that have appeared over the years, apparently overnight. Sometimes they appear as single piles or stacks. No one has ever figured out who is responsible, creating speculation of an otherworldly artist.

In nearby Wheeler, facing the Nehalem Bay, Old Wheeler Hotel owner Winston Laszlo says he’s encountered several things in that old building he couldn’t really explain. Sometimes, he said, he believes he sees someone in the corner of his eye, only to discover there’s no one there.

Once, Winston was looking in a mirror in the hotel’s public area and saw the reflection of a man sitting in a chair behind him. Winston says he turned around to look at the man, whom he didn’t recognize as a guest, and there was no one there.

A pair of ghost hunters even came to the visit the place and took photos of what they believed could be “spirit orbs” just outside the basement area. Winston still has copies of these.

Winston and wife Maranne Doyle-Laszlo say the entire building seemed to be against them during the process of remodeling the ragged old construct into the first-rate hotel it is now. They had a nagging feeling a presence seemed to arrange one disaster and setback after another, such as when a window blew out in a storm. Then, one day, they say the building seemed to accept them, and reconstruction proceeded smoothly thereafter. (www.oldwheelerhotel.com. 877-653-4683.)

In an email just before her visit, ghost hunter Martina DeLude told Winston that made sense. “Ghosts that haunt residential and business locations become very threatened when someone starts changing things that they are accustomed to. Some spirits actually become incensed when furniture is moved around. Just like the living, most spirits do not like change. Possibly, as soon as they realized that it was once again going to become a hotel – perhaps something they may remember – they decided to help you along instead of stifling your efforts.” There’s more on their investigation of the Old Wheeler Hotel at http://www.nwpprs.com/Investigations/Places02/OldWheeler.html.

In other tales, Wheeler Antiques owner Garry Gitzen says a Wheeler woman, descended from local tribes, actually burned down her own house in recent years because disturbing spirits haunted it. She did this in lieu of tearing the thing down, never rebuilding it, with rumors floating about that Native American children had died in a fire in that spot in ancient times.

Not all is creepy here. According to Winston and Garry, there is a host of well-meaning spirits there known as the “Good Spirits of Wheeler,” and Ekahni Books owner Peg Miller says the place is a sort of “spiritual vortex lite.” They all point to something they call a “Wheeler Moment,” where serendipity seems to suddenly rear its head. Locals talk of numerous circumstances where pleasant, happy coincidences popped up, assisting folks in some way. They all note various incidents where someone is discussing wanting to do something, and someone or some opportunity arises that helps things along – like the time the Garry and Winston were talking about creating a film festival, and they discovered a documentary filmmaker was staying in town.

At the very tip of Oregon, Astoria is full of major ghost stories of one sort or another. That’s no surprise, considering it’s the oldest settlement west of the Mississippi.

The Liberty Theater is widely regarded as haunted. It was once a haven for the likes of Duke Ellington, Jack Benny, Guy Lombardo and supposedly even gangster Al Capone. Purportedly, it’s also occupied by someone named Paul. One employee was quoted as saying that Paul is “quite handsome,” giving him the nickname Handsome Paul. He apparently wears a “white tuxedo and a panama hat,” according to the Clatsop County Historical Society.

Cast and crews over the years have talked about spotting him. While mostly just an apparition, he’s been known to slam doors and make other unruly noises. Other tales from the theater include objects gliding through the air, knobs unscrewing themselves from appliances and utilities, as well as two or three other inhabitants from beyond.

Also famous for being haunted is the firehouse there, plus the town has a brutal history of men being “shanghaied” in the early part of the century.